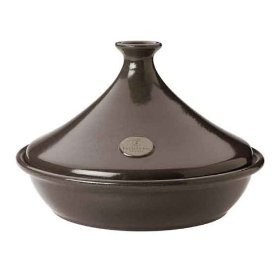 Price:
As of 2022-05-25 20:05:18 BST (more info)
Product prices and availability are accurate as of 2022-05-25 20:05:18 BST and are subject to change. Any price and availability information displayed on http://www.amazon.co.uk/ at the time of purchase will apply to the purchase of this product.
Availability: Not Available - stock arriving soon
Product Information (more info)
0 0
CERTAIN CONTENT THAT APPEARS ON THIS SITE COMES FROM AMAZON SERVICES LLC. THIS CONTENT IS PROVIDED 'AS IS' AND IS SUBJECT TO CHANGE OR REMOVAL AT ANY TIME.

The Emile Henry 32cm (2.5Ltr) Tagine is a match-making combination of Emile Henry's Flame range of ceramic cookware with North African cooking. The Burgundy clay will not crack or discolour at high temperatures - it's resilient enough to take the shock of being transferred straight from the freezer to the oven or stove - and distributes heat evenly and gently to ensure consistent cooking. The advanced Ceradon ceramic used in the Emile Henry Flame 25cm Tagine means it can be used to sear your meat and vegetables on the stove before transferring your tagine to the oven. Shaped in a traditional Moroccan point to allow steam to circulate and moisture to run back into the dish, enhancing and retaining flavour, this tagine enables you to make delicious, succulent meat and vegetable dishes in a North African style. As well as this, the Emile Henry Tagine looks stunning in a glazed dark green olive, so you'll want to show it off by using it to serve at the table. As is standard for the Emile Henry Flame ceramic cookware range, it is microwave and dishwasher safe and highly resistant to chipping and cracking.

Emile Henry 32cm Tagine from the Flame range. Made in France 2.5 Ltr capacity. The extremely hard glaze is shockproof and resistant to scratching and chipping Keeps hot or cold - use directly from freezer to oven to table (0°F to 500°F) May be used with gas, electric and halogen hobs, traditional ovens and microwaves